An important decision has been taken by the state government regarding marriage. The Ministry of Home Affairs today issued a notification informing that from now on, online approval for marriage will have to be sought in the state. In this process, marriage planning with more than 100 people will not be allowed. New software has been developed by the government for this. Which has been made operational on Digital Gujarat Portal. Registration slips can be downloaded by registering here.

In view of the Koro epidemic, the state government will have to register online for upcoming weddings in Gujarat. A software called Online Registration for Organization Marriage Function has been developed by the National Informatics Center for conducting wedding ceremonies. This software has been activated on Digital Gujarat Portal (www.digitalgujarat.gov.in). Under which the applicant has to apply online on this portal to hold the wedding ceremony. After making this application the applicant can take a print of the registration slip or even save the PDF. If a police officer or an officer or employee of the local administration requests a registration slip from the applicant, the applicant has to submit it.

arlier, the Gujarat government had made the approval of the police department mandatory for weddings or any other reception in the state. However, the decision was reversed and a waiver was granted. When the rule was made to organize not more than 50 percent of the capacity of the wedding venue, but within the limits of 100 people. 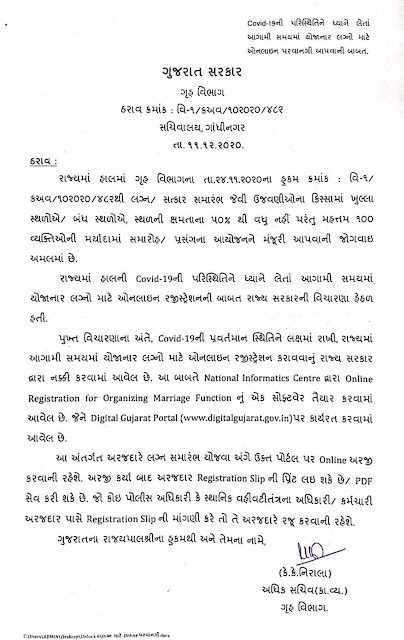