The Panchayat Selection Board under the Panchayat section of the State, provides information related to the recruitment of panchayat talati and old-age clerks in the Kannidae lake by 6 months prior to the District Committees. There are more than 30 lakh applications for about 3,000 positions. At that time the calculation of the system was to be completed by January but Akila was delayed for one reason because of Kanidai Lakki. Now there are current circumstances which will be held in the middle of 2019, after the Lok Sabha elections.

According to government sources Kannidai Lakki, every candidate was allowed to apply in more than one district in both cadres, which has made the number of applications much bigger. All Kannidae Lakhya districts have to take the examination at the same time on one day and apply for any district, but the examination can be given at one place.

TALATI MANTRI EXAM DATE
It is necessary for the system to arrange on as many places as requested by Kanidai Lakshya. While there was a solution to the question raised by duplication, only 10% of the economic reserves have raised another issue for the test taker system, which is applicable to the Kannidae Lakshya Parishad. In addition to this, the government has decided to provide relaxation to the non-resident section of the legislation a few days earlier. What can be done for young people who have had the opportunity to apply for reapplying after the reappointment of the youth who have completed the age at the time of applying for the application? For this, the board has asked for guidance from the panchayat department. Examination of examinations due to relaxation in age limit and 10% economic reserve has stopped. Alternatives are open, including canceling all old requests and inviting renewal applications. 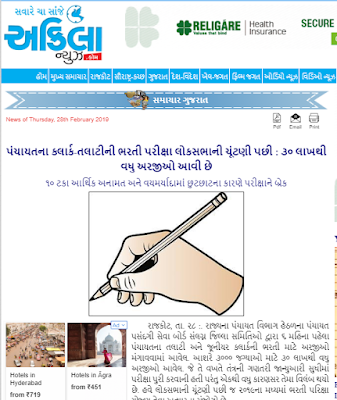 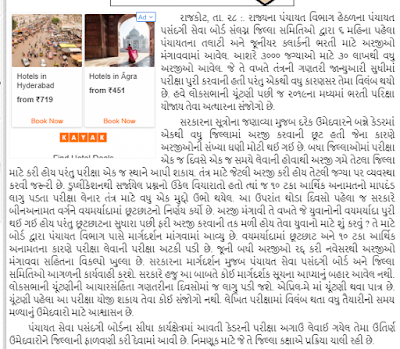 Under the guidance of the government, the Panchayat Service Selection Board and the District Committees will take further action. The government is still not giving any guidance on this matter. The Code of Conduct for the Lok Sabha elections will be applicable only on the day of computation. The elections are due in April-May. There is no circumstance to be held before this election. There is consolation for the candidates who have got more time to prepare for delays in written exams.
IMPORTANT LINK:
READ AKILA NEWS REPORT FROM HERE